Karpathos (Greek: Κάρπαθος) is the second largest of the Greek Dodecanese islands, in the southeastern Aegean Sea. Together with the neighboring smaller Saria Island it forms the municipality Karpathos, which is part of the Karpathos regional unit. From its remote position Karpathos has preserved many peculiarities of dress, customs and dialect, the last resembling those of Crete and Cyprus. The island has also been called Carpathus in Latin, Scarpanto in Italian and Kerpe in Turkish. 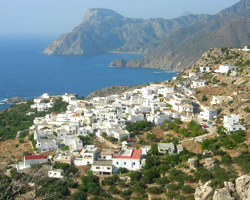 The island is located about 47 kilometres (29 miles) southwest of Rhodes, in the part of the Mediterranean which is called, after it, the Carpathian Sea (Latin: Carpathium Mare). The Sea of Crete, a sub-basin of the Mediterranean Sea, has its eastern limit defined by the island of Karpathos.[2] Karpathos' highest point is Mt. Lastos, at 1,215 metres (3,986 ft). Karpathos comprises 10 villages. All villages preserve intensively the traditional style of the island. In the southeast of the island you can find Pigadia (official name Karpathos), capital and main port of the island. 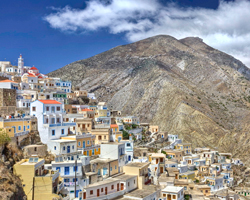 Karpathos Island National Airport, with its large runway, is located on the south side of the island. Karpathos is connected to neighboring islands and to the mainland via ferries and airplanes. The ferries provide transport to and from Piraeus (via Crete and Rhodes). Scheduled domestic flights connect the island with Rhodes, Kasos, Crete and Athens daily. Additionally, charter flights from various European cities are frequently scheduled during the holiday season (April–October).

Lefkos village is located very close to Mesochori and 35 km from the capital of Karpathos. It is a small picturesque settlement, a strong pole of attraction for all visitors, as it has magnificent beaches, excellent tavernas and friendly family owned businesses. It is the ideal place to relax and enjoy your holidays in Karpathos as you will be surrounded by nature, away from the noise, with idyllic suroundings and perfect places to visit.

Karpathos is so varied and original that it is ideal for photographers and painters. Quite a few artists have taken refuge here. It might be a bit difficult to get here, but once you've made it you wont regret it!

A special place in the hearts of Karpathian people has the traditional festivity "kathisto glenti". The men sit around a table with the music players, drinking wine, composing and singing songs. They are given the opport;unity to espress their feelings depending the occasion.